Internationally renowned artist Mackenzie Thorpe has been working voluntarily on a subject close to his heart and former home to help victims of one of the worst flash floods to hit the Yorkshire Dales in living memory.

Mackenzie, who has just completed a world tour, devoted almost a week of his time to produce the rare watercolour entitled Silver Lining which will be the centrepiece of a charity auction next month.

Proceeds will help those most in need in the wake of the extreme flooding, described as a one in 1,000 year event, which severely damaged more than 250 homes, around 35 farms and over 40 other businesses.

Mackenzie said: “When I heard about the terrible floods in Arkengarthdale and Swaledale I could only think about the people of the area, going about their everyday business and suddenly having to deal with the havoc and uncertainty something like this brings; it impacts everyone.

“To hear that the whole community has converged to help and support each other is nothing less than I could have expected – it is Yorkshire after all – and so when I was approached I was thrilled that I could help with the fundraising.

“I know the Dales, the people, the farmers, the landscape like the back of my hand. I’ve played with my children there and walked my dogs over hill and dale, there’s simply nowhere quite like it and so I painted a special original watercolour to help with the fundraising.

“Silver Lining depicts a shepherd with his dog, gazing over the glorious Dales with the dark clouds retreating – the silver lining signifying the wonderful community. The original piece is unique, I don’t use watercolours that often, and is only available through the auction.”

Middlesbrough-born Mackenzie set up his first studio, the Arthaus Gallery in Richmond, North Yorkshire, when he became a full-time artist 30 years ago. He went on to become one of the UK’s biggest selling contemporary artists.

He personally presented the oak-framed picture, one of only half a dozen Mackenzie Thorpe watercolours currently available on the world market, to flood fundraisers at the gallery at the weekend.

It was accepted by Michael Bilton, a well-known Swaledale-based artist, whose home and studio were devastated by the flood, with only three partially-soaked six-feet high canvases salvageable.

Michael, who has had to leave his flood-ravaged home in Grinton, said: “Silver Lining is going to attract an enormous amount of interest, it’s a very generous thing for someone like Mackenzie to do. He’s got that love for the Dales, he’s going to feel for it even though he wasn’t there at the time of the flood.”

The Arkengarthdale and Swaledale Flood Relief Fundraising team is running two initiatives with all proceeds going to the Two Ridings Community Foundation for distribution to those most in need in Arkengarthdale, Swaledale and Wensleydale.

Over £5,000-worth of raffle tickets have already been sold and an auction of promises will also be held as part of the “Bands, Bids and a Big Night Out” at The Garden Rooms at Tennants auction house in Leyburn on October 19th.

More than 70 pledges have been received for the auction with lots ranging from an aircraft wing walk to a shepherd’s hut holiday, a complete fireplace package and the Mackenzie Thorpe original. 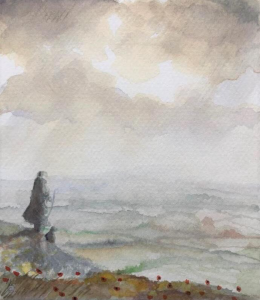